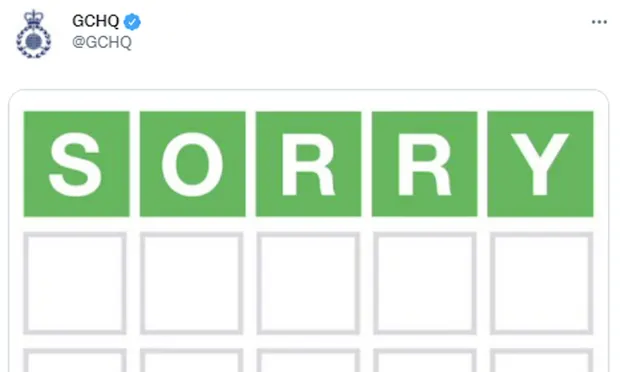 Crossword clues have long been one way of disguising secret messages, so an aptitude for word puzzles could be seen as a welcome skill in any aspiring spy.

Alas, those proclaiming their prowess online for the latest word-game craze, Wordle, seem not to have impressed UK’s top spymaster, Richard Moore, putting him at humorous odds with the country’s other spy agency, GCHQ.

A smartphone is seen with Wordle on the screen ‘Incredible’: from Wordle’s Welsh beginnings to the New York Times Read more The MI6 chief – who goes by the codename C – tweeted his annoyance at users who post their results after playing the web-based word game, created by a British software engineer and sold for a seven-figure sum after sweeping the globe in just a few months.

“Thinking of unfollowing those who post their Wordle results …” Moore tweeted. In response, GCHQ tweeted a mocked-up picture mimicking a Wordle player’s score, which read: “Sorry”.

Among those who replied to Moore’s tweet, TV presenter Anneka Rice tweeted: “Oh God I agree. What’s going on here!”

Among those who appreciated GCHQ’s imaginative response was the UK’s ambassador to Sweden, Judith Gough, who tweeted “Genius”. Another Twitter user queried: “@GCHQ Surely you know the Wordle answer before you start.”

Twitter feeds are now full of people posting pictures of the green, yellow and grey boxes used in the puzzle which challenges players to guess a five-letter word within six tries.

The deceptively simple online word puzzle has had a meteoric rise since its launch last autumn, from 90 daily players in November to 300,000 at the beginning of January, to two million last weekend.

The game was created by Josh Wardle, who was born in Wales but now lives in New York, and was bought this week for a seven-figure sum by the owner of the New York Times newspaper, who said it would remain free to play.

Hemal Jhaveri, the managing editor of Wired magazine, may have come up with a solution to curb boastful players’ enthusiasm for sharing their results, tweeting: “If I were the NY Times I’d make Wordle free to play but charge 99 cents to post your score on Twitter.” She added: “They’d recoup their investment in a day.”